Why Don't We [CANCELLED] Tickets

EVENT CANCELLED. Please contact your ticket point of purchase to claim a refund on your tickets.

'Big plans have been set as the boys who made the world fall in love with only '8 letters, Why Don't We, are finally back for a good time with their fans at The Good Times Only Tour happening at Cadence Bank Amphitheatre on Wednesday, 27th of July 2022. The comeback tour is in support of their 2021 studio record "The Good Times and the Bad Ones". They're the voices behind hit singles "Big Plans", "Fallin' (Adrenaline)", and the RIAA Platinum-awarded "8 Letters" that won the hearts of listeners worldwide. Set to hop on their tour, Why Don't We recently shared a new single "Don't Wake Me Up" with Jonas Blue where they long for some certain love. Well '8 letters that are pretty certain are fans' 'I love you', screaming as the boys perform their best anthems and new songs live on stage at The Good Times Only Tour. Come and join the good time by grabbing your tickets now! 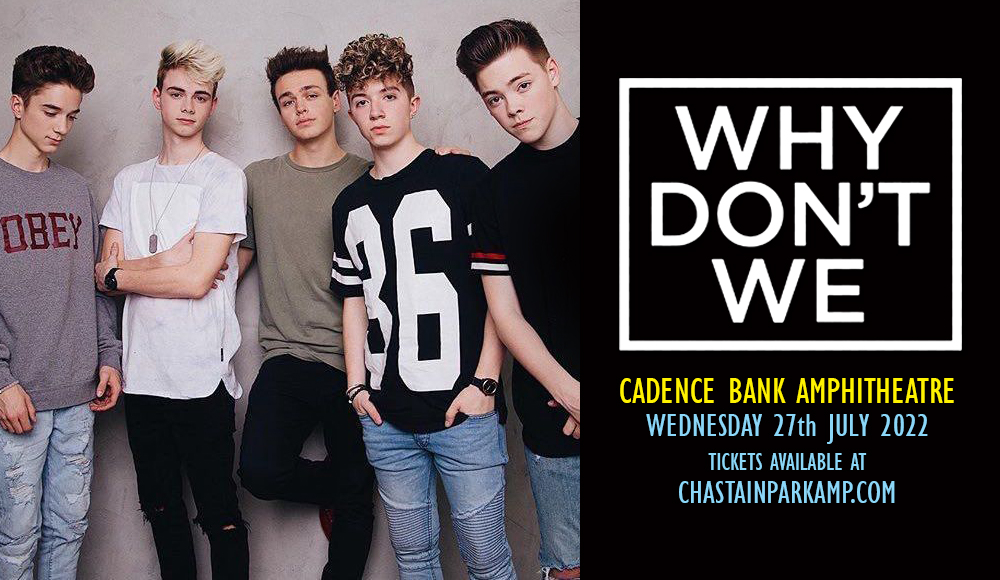 The world-dominating boyband behind "8 Letters" that got listeners across the globe hooked traces its beginnings to 2016 when members Jack Avery, Corbyn Besson, Zach Herron, Jonah Marais, and Daniel Seavey all met in LA, and thus brought Why Don't We to life. The band dropped their first EP "Only the Beginning" and went on to perform on a headlining tour. It was definitely 'only the beginning with the band releasing a couple of more EPs up until their big breakthrough with their 2018 debut full-length album "8 Letters". The album hit #9 on the Billboard 200, featuring its singles "Trust Fund Baby", "Hooked", "Talk", and the RIAA Platinum-awarded global hit "8 Letters".

From eight letters that rocked the world of fans across the globe, Why Don't We revealed "Big Plans" at the onset of 2019, marking the start of a slew of singles throughout the year including "What Am I" and "I Don't Belong in This Club" with Macklemore. With fans itching for a new album, the band closed the year with single "chills" before going on a nine-month break.

By September of 2020, Why Don't We released their comeback single "Fallin' (Adrenaline)", the lead single from their then-upcoming album "The Good Times and The Bad Ones". They've definitely got 'big plans with the album finally released by January of 2021. The boys gave fans a glimpse of the album's last developments and behind-the-scenes on their YouTube documentary, "30 Days With" prior to the big release.

The album, which is mostly a shared effort by the boys themselves with some guest production help by Travis Barker, Skrillex, and Timbaland, made it to #3 on the Billboard 200, marking the band's highest entry to the chart.

With two commercially successful studio records that won hearts and got fans hooked for more, Why Don't We is set for good times ahead with their fans' love and support that screams those 'eight letters the band always wanted to say. So, don't miss out on this chance to let the boys hear those 'eight letters you wanted them to always want them to hear live on stage at The Good Times Only Tour. Book your tickets now!